Madonna begins world tour on May 21

Madonna will open the "Confessions Tour" in Los Angeles on May 21, work eastward through North America and jump to Europe on July 30 in Cardiff, Wales, it was announced Monday. "I'm going to turn the world into one big dance floor," the 47-year-old singer said in a statement. 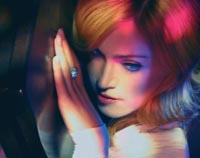 Madonna begins world tour on May 21

It is Madonna's first tour since the 2004 "Re-Invention Tour." She will be supporting her 2005 album, "Confessions on a Dance Floor." Other stops include Las Vegas, Phoenix, Chicago, Montreal, New York, Boston, Philadelphia, Miami and Atlantic City, New Jersey.

European destinations include London, Rome and Paris. The tour will also extend to Japan, featuring concerts in Tokyo and Osaka. More dates are expected to be added. As previously announced, Madonna will make her first festival performance at the Coachella Valley Music & Arts Festival in Indio, California, on April 30, reports the AP.