German President Horst Koehler arrived Monday in Mozambique for a three-day visit intended to boost business and political links as part of a wider effort to improve dialogue between Europe and Africa. Mozambican President Armando Guebuza hailed Koehler's trip as proof that Germany wanted to help Africa in its struggle for development. 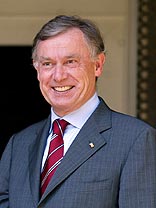 Koehler, a former head of the International Monetary Fund, praised the multiparty democracy in Mozambique and said it was a priority nation for German development programs. He said Germany wanted to help Mozambique boost its technical and professional education. The southern African nation is one of the world's poorest countries, having been shattered by a long, post-colonial civil war that ended in 1992. But it has earned praise abroad for its sound economic policies and is attracting growing foreign aid and investment.

Koehler was due to meet the parliamentary speaker later Monday and hopes Tuesday to meet privately with former President Nelson Mandela, who is frequently in Maputo with his wife, Graca Machel, the widow of Mozambique's first independence leader. He will also visit Botswana and Madagascar during his African tour, reports the AP.