Thunderstorms battered eight states across the Midwest with tornadoes and hail as big as grapefruits, killing at least 23 people, injuring scores and destroying hundreds of homes. Tennessee was hardest hit, with tornadoes striking five counties and killing 19 people along one 25-mile (40-kilometer) path Sunday, the National Weather Service said. 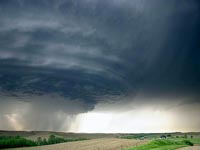 Most of the Tennessee deaths were reported around the Gibson County towns of Bradford and Dyer, said James Brown, assistant emergency management director for the county. Among the dead were a family of four from Bradford, officials said. Tennessee officials estimated 1,200 buildings were damaged in Gibson County alone.

About a half-dozen tornadoes struck Arkansas and one destroyed nearly half of the town of Marmaduke, according to a fire department official. Hail 4 inches (10 centimeters) in diameter slammed right through the roof of one mobile home in Arkansas, weather service meteorologist Newton Skiles said.

About 30 miles (48 kilometers) from Newbern, Tennessee, part of the southeast Missouri city of Caruthersville was wiped out, said Randal Lee, a sheriff's department dispatcher. Mayor Diane Sayre said there were no known deaths in the city of 6,700. Severe thunderstorms also struck Indianapolis as thousands of fans left a free John Mellencamp concert that was part of the NCAA's Final Four weekend, reports the AP.