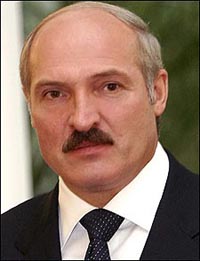 Lukashenko was re-elected last month to a third term of five years, in elections the opposition and foreign observers said were not free and fair. He has not been seen on television news broadcasts since March 28, when he thanked the special services for dispersing demonstrators, and opposition activists claim even that appearance had been taped ahead of time. "Lukashenko has problems with his heart and nerves, but they are trying to hide it," said Sergei Kalyakin, head of opposition presidential candidate Alexander Milinkevich's election headquarters.

Lyogky said Lukashenko would make an appearance later Monday at a celebration of the 10th anniversary of the Russia-Belarus Union, and that his inauguration would be held April 8. Belarusian election commission chief Lidiya Yermoshina initially had said the inauguration was scheduled for March 31. "The president's five-day absence from the screen can be explained by a change in his work schedule," Lyogky said. "This is connected with the postelection period."

In Moscow, Pavel Borodin, the Russia-Belarus Union's top official also insisted that Lukashenko was in good shape, denying rumors that he may have had a small stroke. "There was no small stroke, he was simply busy with internal as well as external problems," Borodin said at a news conference. "He is in excellent condition and mood there must be just technical reasons" for his absence.

Meanwhile, Milinkevich sent the Supreme Court an appeal demanding invalidation of the election. "We know there is no just court in Belarus... But we demand observance of the law so that there is not the possibility to speak such propaganda as that the opposition is only shouting and has no real arguments or facts," he wrote.

The appeal listed "appalling facts of legal violations, showing that there was a farce, not elections, in Belarus," Milinkevich wrote in his 26-page appeal, which was accompanied by 733 pages of evidence, his campaign headquarters said.

The appeal was sent to the court by mail since the court refused to accept it in person from a Milinkevich aide. Also Monday, a spokesman for the Russian embassy in Minsk said Belarusian authorities have ignored Moscow's request to release four Russians who had been arrested together with hundreds opposition activists protesting election results. In Moscow, two leading rights activists from the For Human Rights group were detained for picketing the Foreign Ministry in protest of its failure to defend Russian activists in Belarus, reports the AP.