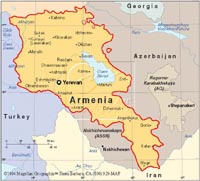 The shooting occurred Sunday morning near the village of Ashagy Abdulrakhmanly, and gunfire broke out again from the same position about 12 hours later, the ministry said.

The two countries remain at odds over the status of Nagorno-Karabakh, an ethnic Armenian enclave within Azerbaijan. A cease-fire agreement was reached in 1994 after six years of fighting, and the enclave is now under the control of ethnic Armenians, whose troops face Azerbaijani forces across a half-mile-wide (kilometer-wide) no man's land.

Clashes break out sporadically and the countries' presidents have traded increasingly bellicose statements since talks to resolve the enclave's status broke down in February.