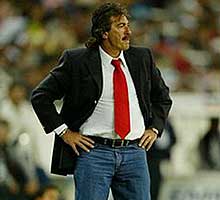 Mexico coach Ricardo Lavolpe included 26 players in his list, which he will have to reduce to 23 before the June 9-July 9 tournament in Germany.

Bravo scored twice in Mexico's 2-1 win over Paraguay in a friendly match last week in Chicago.

Mexico will play four warmup matches before the World Cup.