Bolivian President Evo Morales arrived in Brazil to lobby the Inter-American Development bank to forgive as much as US$3.5 billion ( Ђ 2.9 billion) owed by the Andean nation and four other poor Latin American countries. 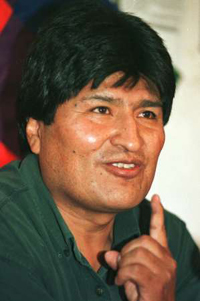 Morales, a strident leftist and Bolivia's first Indian president, is expected to push for the five-nation debt relief package at the bank's annual meeting starting Monday, one of the region's most important economic forums.

But Latin America's two biggest powerhouses, Brazil and Mexico, are balking at supporting the debt write-off for Bolivia, Guyana, Haiti, Honduras and Nicaragua unless richer nations foot the bill.

"This has to be talked about and negotiated because the question is, 'Who is going to be responsible in financial terms?"' Brazilian Planning Minister Paulo Bernardo said ahead of the event in this southeastern Brazilian city for top Latin American and Caribbean government finance officials.

Bolivia owes US$1.6 billion ( Ђ 1.3 billion) of the total amount, and Bolivia's ABI government news agency reported Sunday that Morales would seek to have the entire amount forgiven.

The 47-nation bank is owned by its member countries, mainly from the Western Hemisphere, but also including European countries, plus Japan and South Korea.

Mexico and Brazil support the debt-relief idea but don't want to pay for it at the cost of sacrificing future IDB loans, Mexican Finance Minister Francisco Gil said.

He and Bernardo suggested that the United States and other rich countries, possibly European, foot the bill.

Delegates agreed Sunday to form a special committee headed by Brazil charged with coming up with a financing solution for a debt relief package by the end of the year, said Clay Lowery, the Treasury Department's assistant secretary for international affairs.

Lowery said the U.S. delegation is proposing a complicated structured-financing arrangement that will lead to debt relief while not hurting the IDB's balance sheet, reports the AP.