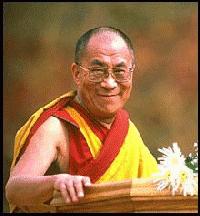 The Dalai Lama, exiled spiritual leader of Tibetan Buddhists, has repeatedly said he wants autonomy, not independence, for his Himalayan homeland. But Beijing has expressed suspicion.

"As long as the Dalai Lama makes clear that he has completely abandoned Tibetan 'independence,' it is not impossible for us to consider his visit," said Ye Xiaowen, head of the State Administration for Religious Affairs, quoted by the China Daily newspaper.

But Ye said the Dalai Lama "has failed to deliver a clear message on his stance."

China claims Tibet has been part of its territory for centuries, and communist forces occupied the region in 1950. The Dalai Lama fled in 1959 to the north Indian city of Dharmsala, where he formed a government-in-exile. He hasn't been back since.

The Dalai Lama announced last month that he hoped to travel to China on a pilgrimage and to see the changes in the country. He said envoys had conveyed his message to officials in Beijing.

Tibetan and Chinese officials met in February in southern China.

Lodi Gyaltsen Gyari, the Dalai Lama's representative, led a four-man team in their Feb. 15-23 trip. He said there was a growing understanding between the two sides, though fundamental differences persisted.

The envoys have attended four rounds of talks with China since 2002.

Specific details of those discussions have not been released, but they are believed to have focused on the Dalai Lama's demands for more autonomy for Tibet to protect its unique Buddhist culture, reports the AP.