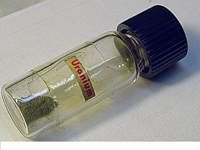 Exports to China may start within four years, Australian Resource Minister Ian Macfarlane said today. An agreement to ensure uranium supplied to China is used only for civilian purposes is scheduled to be signed in Canberra today by China's Premier Wen Jiabao and Australian Prime Minister John Howard.

China and India are both racing to secure nuclear fuel supplies as they seek to cut reliance on oil and coal to power economic expansion. The accord may boost shares of Rio Tinto Group's Energy Resources of Australia Ltd., the nation's largest exporter of uranium, and BHP Billiton, whose Olympic Dam contains the world's biggest-known uranium reserves.

``The obvious companies benefiting from this will be the producers, BHP and Rio,'' said Neil Boyd-Clark, who helps manage the equivalent of $2.5 billion including BHP Billiton and Rio Tinto shares, at ABN Amro Asset management Ltd. in Sydney. ``For the Chinese, this will be important in security of supply. Right now the whole world seems to be looking for uranium.''

Australia is the world's largest holder of low-cost uranium resources. It has 41 percent of global uranium reserves, though it meets only 21 percent of demand due to mining bans at state government level. China plans to boost its nuclear energy fourfold by 2020, reports Bloomberg.