A handful of U.S. college students are doing something available to fewer and fewer Americans: they're getting a firsthand look at Fidel Castro's Cuba. 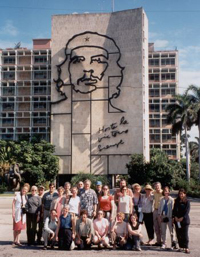 As the Bush administration tightens the U.S. trade embargo on the communist-run nation, students, academics, religious groups and even Cuban-Americans with family on the Caribbean island are finding their travel to Cuba increasingly restricted.

"They're trying to find more ways to get tough with Cuba," said Philip Brenner, a Cuba expert and associate dean at American University in Washington D.C.

"This is a foretaste of more restrictions that will prevent Cubans and Americans from dealing with each other at all," he said.

Brenner helped arrange a four-month visit to Cuba by nine American University students who say they are at times puzzled by the contradictions between Cuban government rhetoric about the benefits of a socialist society and Cubans' lack of material wealth.

"I've traveled a lot and for me it has been very frustrating," said 21-year-old Jessica Skinner, of Grand Junction, Colorado. "I came here being very anti-embargo and now that I'm here, I'm confused."

But the American University students' exposure to the complex Cuban reality is something increasingly rare.

In June 2004, the U.S. Treasury Department's Office of Foreign Assets Control began restricting academic trips to Cuba to visits of 10 weeks or more, eliminating scores of popular one- and two-week trips that universities once offered on everything from salsa dancing and bird watching to colonial architecture.

Treasury officials had complained that many of those trips were tourism disguised as academic tours and were enriching the government of President Castro, who has been in power for 47 of his 79 years, reports the AP.