The defense minister was visiting Afghanistan this week to meet Norwegian peacekeepers and Afghan officials, her ministry said Thursday. 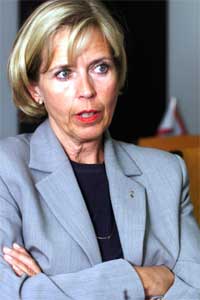 Norway, a Nordic country of 4.6 million that is a NATO member, has about 300 troops in Afghanistan.

The defense minister's agenda includes a visit to a Norwegian contingent in the northern city of Maymana. Those peacekeepers were attacked by a mob armed with assault rifles and grenades in February. Five Norwegians suffered minor injuries in the attack, and three protesters were killed.

Stroem-Erichsen is also scheduled to visit Norwegian units at field hospital in Mazar-e Sharif, an F-16 fighter contingent in Kabul, as well as staff officers assigned to the peacekeeping force.

Norway pulled its last officers out of Iraq late last year, and has said NATO-led operations in Afghanistan will now be a key area of commitment, reports the AP.