Prague braced for an expected flood Thursday and 10,000 people were evacuated from their homes in a southeastern town as rivers, swollen by rain and melting snow, rose to dangerous levels. 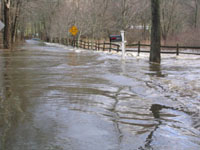 Prime Minister Jiri Paroubek announced he was cutting short a visit to Egypt to return home, and called an emergency session of his Cabinet for Thursday night.

Czech authorities have been anxious to prevent a repetition of the August 2002 flooding, which devastated a large part of the country, killed at least 16 people and caused nearly Ђ 2.5 billion in damage.

Anti-flood barriers were erected throughout the capital, and about 1,500 people on the outskirts of the city were prepared for possible evacuation, Prague Mayor Pavel Bem said, hours before the Vltava River level was expected to peak.

Ten thousand people were evacuated overnight from southeastern town of Znojmo and 14 nearby villages, and two border crossings to Austria were closed as the Dyje River rose to dangerous levels, regional authorities said.

A dam on the Dyje was already overflowing early Thursday morning, and authorities were expecting the flood to reach the town later in the day, the city's spokeswoman Anna Maixnerova said.

In the northwest of the country, the Elbe River overflowed its banks, disrupting public transport in the town of Usti nad Labem.

The Spolana chemical factory on the Elbe in Neratovice, some 30 kilometers (18 miles) north of Prague, halted production Thursday morning to prevent chemicals from spilling into the river, reports the AP.