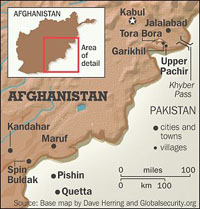 An area security official confirmed the fighting and that two people were killed and four wounded, and said that officials didn't know whether the militants suffered losses.

"Our forces returned fire after miscreants fired rockets and used other munition to target them. We don't know whose fire caused these civilian casualties," said the official who spoke on condition of anonymity because he was not authorized to speak to the media.

The military has said it also lost eight soldiers in the fighting.

Pakistan, a key ally of the United States in its war on terror, has deployed 80,000 troops in the country's tribal regions near Afghanistan and launched a series of operations there in an effort to flush out militants.

Officials say hundreds of members of Afghanistan's former Taliban regime and al-Qaida militants are hiding in Pakistani tribal regions, a claim that most tribesmen deny and say there were no foreign militants in their areas, reports the AP.