Seven decomposed bodies believed to include missing Hmong Americans were found Wednesday in a jungle near Thailand's border with Myanmar, police said. 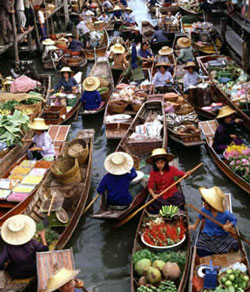 Regional police chief Lt. Gen. Panupong Singara na Ayuthaya said that four Hmongs with U.S. citizenship who were among eight people reported missing in Thailand two weeks ago are believed to be among the bodies found.

"From their clothing, we believe they include the missing Hmong Americans," said Col. Thanet Chaonathung, police chief of Mae Hong Son's Pai district.

Police were led to the corpses by villagers who had noticed a stench in a ravine near a road in Pai, 650 kilometers (400 miles) north of Bangkok. The bodies were found wrapped in rice sacks.

Police in neighboring Chiang Mai said the son of one of the missing men, Yeng Saewong, reported that his father and the seven others had been missing since March 16.

Panupong said the bodies would be sent to forensics experts in Bangkok for identification.

The Hmong live in several countries in Southeast Asia, including Thailand and Laos, as well as southern China. Large numbers from Laos were resettled in the United States after the end of the Indochina War in 1975, reports the AP.