Luis Figo says his former club Real Madrid is struggling because it has given precedence to commercial rather than sporting interests.. 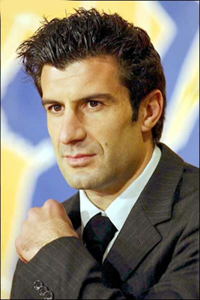 Figo, who left the club for Inter Milan nearly a year ago, said it was no surprise that Madrid hadn't won a trophy since 2003.

"If what's most important about your project is to make a circus, you have much less chance of sporting success," Figo told sports daily Marca on Wednesday.

Figo became Madrid's first signing under former president Florentino Perez in a transfer from FC Barcelona in 2000. Joined in successive years by Zinedine Zidane and Ronaldo, Madrid won the Spanish league twice and the Champions League once in Perez's first three years in charge.

But the new players, including David Beckham, since then, together with five coaches, have been unable to prevent Madrid's worst spell since the early 1950s.

"The beginning of the end was after the first three years, when instead of the sporting route, the commercial route was taken. After the third year, the club signed for signing's sake. Signings weren't made for sporting aims, there were other priorities," Figo said.

Figo said Perez was wrong to instigate long-haul preseason trips as part of his attempts to boost Madrid's marketing clout.

"It's lovely going everywhere and being treated like royalty but that isn't the reality of soccer. Ask Real Madrid's members if it's more important to win every Sunday and be league champion or go on tour for 15 or 20 days as if you were the Globetrotters," Figo said.

"I was surprised by the timing because I don't think it was the right moment. When things go badly you should show your face," he said, reports the AP.