Russian Prime Minister Mikhail Fradkov on Wednesday said the protested presidential election in Belarus reflects the will of that former Soviet republic's people. "Our observers have followed the election and determined that the result of the elections speaks for itself: It was the will of the people," Fradkov told reporters during an official visit to Norway . 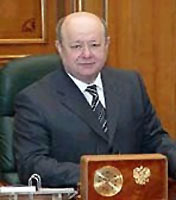 The March 19 re-election of Belarus ' authoritarian President Alexander Lukashenko to a third term with 83 percent of the vote has drawn protests at home and condemnation abroad. The European Union, the United States and the others have called the vote unfair, and many have threatened sanctions against the Lukashenko government.

"We believe any effort to isolate Belarus is unreasonable and counterproductive," said Fradkov, whose remarks were translated from Russian into Norwegian. Russian and Belarus have close ties, and Moscow has generally supported Lukashenko during his 12-year rule. Hundred of opposition protesters have been arrested in Belarus since the election.

"We will closely follow the developments in Belarus and what happens with human rights," Fradkov said at a joint news conference with Norwegian Prime Minister Jens Stoltenberg.

A key issue during Fradkov's two-day visit to Norway , which shares land and ocean borders with Russia in the Arctic , was the region's future as a possible oil and natural gas province. The two nations have a disputed border in the fish and potentially oil-rich Barents Sea , They also have frequent spats over Norway 's claim to waters around its Svalbard archipelago, where Oslo insists on enforcing fisheries management rules.

Fradkov said the two prime ministers showed "a willingness to find compromises on disputes that have built up over the years," but did not give details. On Tuesday, Fradkov and Stoltenberg visited a western Norway facility for processing natural gas from a major offshore find being developed in the Norwegian Sea .

"We spent yesterday showing off Norwegian technology, which is world class," said Stoltenberg. That was because Norwegian oil companies Statoil ASA and Norsk Hydro ASA are vying for a share in the development of Russia 's vast Shtokman natural gas field in the Barents Sea .

Fradkov said a decision, expected in mid-April, was up to Russian companies rather than the government, but that both Norwegian companies were strong contenders. "There is a great potential for cooperation in the petroleum section, and this is not limited to just Shtokman," he said.

On Wednesday, the Russian prime minister was also having an audience with Norway 's King Harald V and Queen Sonja, as well as meeting with Norwegian parliamentarians and business leaders. He was to return to Moscow in the late afternoon, reports the AP.