Britney Spears' songwriters have accused a South Korean pop composer of plagiarism and are seeking damages, a music publisher said Wednesday. Universal Music Publishing Korea, the company that handles South Korean copyright for Spears' music, said her songwriters had complained that "Get ya," performed by one of the country's most famous pop stars Lee Hyo-lee, sounded similar to a song they penned for Spears called "Do Something." 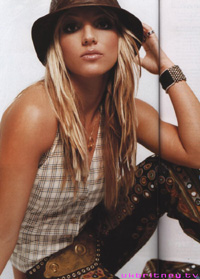 "Get ya" was the lead song on Lee's second album, released in February this year, while Spears released "Do Something" in February 2005. Kevin Cho, general manager of Universal Music Publishing Korea, said Spears' songwriters believed the Korean track had been "partially plagiarized" and the company sent their complaint to Lee's composer, Kim Do-hyun. Cho said they were seeking a settlement of undisclosed terms, but hadn't yet received a response from Kim's side.

Kim has acknowledged in interviews with local media that he was influenced by the Spears' song, but denied copying directly from it. Kim wasn't immediately available for comment Wednesday. Lee, whose sexy style has earned her prominent appearances in advertising campaigns, is staging a comeback this year with a return to live performances, reports the AP.