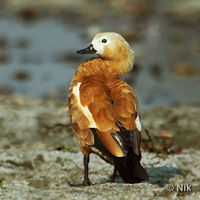 The Czech Agriculture Ministry said Wednesday that preliminary tests indicated a dead swan found in the south of the country had the H5N1 bird flu virus. The ministry's spokesman Tomas Loskot said the tests, carried out in a Prague lab, still needed to be confirmed by a EU reference lab in Britain .

Loskot said results from the lab in Britain should be available early next week. The swan was found March 22 on the Vltava river near Hluboka, 130 kilometers (80 miles) south of Prague .

Another dead swan found on Saturday near Ceske Budejovice, 150 kilometers (93 miles) south of Prague, tested positive for the H5 virus, and further tests will be conducted to determine whether it had the H5N1 strain, Loskot said, reports the AP.