A statue of Polish freedom fighters that stood on the Boston Common for 23 years before it was abruptly removed will be installed in a plaza near a museum, officials said. "Partisans," whose removal stirred outrage in the area's Polish community, will be placed near a subway stop on the south Boston waterfront, the Massachusetts Bay Transportation Authority announced Tuesday. 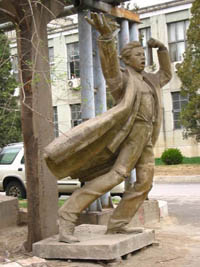 "I'm convinced we have identified a superb site for this symbol of freedom," General Manager Daniel Grabauskas said in a statement. The statue of five weary, emaciated horsemen will stand near the new Institute for Contemporary Art. The 3,500-pound (1,575-kilogram) aluminum sculpture, a tribute to Poland 's struggles against Nazis and Communists, landed on the Boston Common in 1983. But what was meant to be a three-week stay stretched on long afterward because the foundation that loaned the sculpture never reclaimed it.

Members of the city's art elite felt it didn't fit in a park largely devoted to American historical figures. The city had safety concerns and put the statue in storage in January. Grabauskas had vowed to find a permanent spot for the statue, in part because of his Eastern European roots. The transit authority hopes to have it in place by early summer, reports the AP.