Brazil's ruling politicians have been shaken by a scandal involving prostitutes, suitcases full of lobbyists' cash and an apparent violation of bank secrecy laws that brought down the finance minister and again raised questions about the leadership of President Luiz Inacio Lula da Silva. 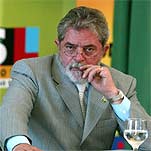 And while Silva quickly named a replacement Tuesday who tried to contain the damage by promising economic stability, analysts worry that the downfall of Antonio Palocci, the architect of Brazil's economic recovery, may prompt the president to impose costly populist policies in order to get re-elected this year.

At least briefly, this latest scandal has shaken the confidence of investors: The Brazilian real dropped nearly 3 percent against the U.S. dollar and stocks on Sao Paulo's benchmark Bovespa index fell more than 1 percent in intraday trading on Tuesday.

Palocci's ouster Monday deprives the leftist Silva, known popularly as Lula, of a longtime ally, campaign organizer and cabinet minister who had reassured investors by putting Latin America's largest economy on a course of slow and steady growth.

And it further tarnishes the image of Silva and the ruling Workers Party, which lost much credibility last year after a former ally accused the party of financing campaigns illegally and paying opposition lawmakers 30,000 reals (US$13,730, Ђ11,220) a month for support in Congress.

"This was very bad for Lula," said political risk analyst Ricardo Ribeiro at MCM Consultants in Sao Paulo, speaking by telephone. "This will trigger memories of events last year that had faded from people's minds."

Silva, who is widely expected to seek a second four-year term in October, wasn't personally linked to the previous scandal, but his popularity tumbled as his powerful Chief of Staff Jose Dirceu was forced to resign. Dirceu and two other legislators later were expelled from Congress and four others resigned to avoid impeachment.

In this case, Palocci was accused of frequenting a house in the capital of Brasilia where lobbyists threw parties with prostitutes and money arrived by the suitcase, possibly for political payoffs. He denied the accusations, but the scandal erupted when the personal bank records of a a key witness  the caretaker at the house, who testified that he saw Palocci there "10 or 20 times" were leaked from the state-owned Caixa Economica Federal.

Brazilians speculated that the government had hoped to show that the caretaker was paid to accuse Palocci. As it turned out, the caretaker had been born out of wedlock, and said his biological father gave him the money rather than face a paternity suit.