Arab leaders opened their annual summit Tuesday with generous praise for January's Palestinian elections and insistence that they be directly involved in helping to shape the future of Iraq . Arab League Secretary-General Amr Moussa also called on Arabs "to enter into the nuclear club and make use of nuclear energy for peaceful purposes," a plea that comes as the world is wary about nearby Iran 's nuclear ambitions. 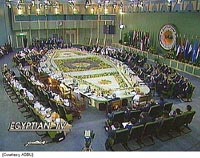 The summit of the 22-member Arab League is contending with complex issues involving Iraq 's future, Iran 's nuclear dispute with the West and how to deal with a Hamas-led government in the Palestinian territories. But the absence of at least 10 heads of state raised concerns of a lackluster summit in a year where many had hoped to see serious efforts at dealing with regional troubles.

The Arab role in Iraq led to some bitter arguments in early summit meetings, with Iraqi Foreign Minister Hoshyar Zebari harshly criticizing his counterparts for not playing a stronger role in helping rebuild his wartorn nation. For their part, Arab governments already suspicious of non-Arab Iran have been irritated by plans for talks on Iraq between Iranian and U.S. officials.

League chief Moussa was particularly emphatic about Iraq in his address. "Any solution for the Iraqi problem cannot be reached without Arabs, and Arab participation," he said. "Any result of consultations without Arab participation will be considered insufficient and will not lead to a solution.

"Unilateral deals will not solve the problem." One resolution to be approved at the summit urges Arab countries to send ambassadors to Iraq , a key demand of the embattled Baghdad government. The draft resolution gave no timeframe for the dispatch of such envoys.

The U.S. State Department has urged Arab leaders at the summit to "be as supportive as possible of the new Iraqi government" by sending ambassadors and providing economic assistance to Baghdad . In his opening speech, Algerian President Abdelaziz Bouteflika, host of last year's summit, called on Iraqis to close ranks to avoid a sectarian conflict pitting the country's Shiite majority against the once-dominant Sunni Arab minority.

Iraq 's neighbors, he said, should "honestly cooperate with the Iraqi people to preserve the country's integrity and unity." The host, Sudanese President Omar al-Bashir, used his opening speech to praise Palestinian elections and denounce Israel and Western countries that have threatened to cut off aid in response to the victory of the militant Hamas.

"We say no to robbing the Palestinian people of their democratic choice, no to punishing the Palestinian people for exercising their right to choose who rules, and no to succumbing to Israel's violations of all the promises it made," he said, winning the applause of the audience of heads of state and delegates. Hamas' landslide election victory in January has raised fears of a halt in the Mideast peace process. The United States and European Union have threatened to cut direct financial aid vital to keeping the Palestinian Authority running, and Washington has pressed its Arab allies to follow suit.

However, a resolution to be adopted by the leaders meeting in Khartoum will pledge continued Arab funding for the Palestinian Authority. Al-Bashir also condemned "terrorism in all its forms" and called for the use of all means to fight it. But he asked for an international conference to "agree on an objective definition of terrorism" a long-standing demand by several Arab nations.

Sudan is also hoping to win Arab backing for its position on the conflict in its Darfur region, where it is resisting Western pressure and a U.N. resolution for the African Union peacekeeping force there to be replaced by a bigger U.N. force. A summit resolution on Darfur caused late-night wrangling Monday.

Sudan had come up with a version that was unacceptable to Moussa, diplomats said, and it took ministers four hours to alter the statement to offer only vague support for Sudan . The resolution also does not commit Arabs to any financing of African Union forces, as the United States had hoped for. Al-Bashir, in power since leading a 1989 military coup that toppled a democratically elected government, said he hoped the Darfur conflict would end by the time the mandate of the African peacekeeping force there ends in September.

"We hope that during this period we can put Darfur problems behind us forever and that the African Union forces with the experience gained are able to carry out their task without outside interference," al-Bashir said. Darfur may have been one issue that kept some of the regional heavyweights, including Egypt and Saudi Arabia , from attending the summit, though they cited security concerns or domestic issues, reports the AP.