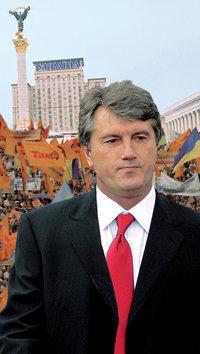 The meeting marked the beginning of a series of individual presidential consultations with Yanukovych's Party of Regions and Yushchenko's former Orange allies who were elected to parliament in Sunday's vote, said Larisa Mudrak, a presidential spokeswoman. She refused to comment on whether Yushchenko and Yanukovych were discussing a possible parliamentary coalition.

Yushchenko had planned to consultat the leaders of the top vote-getting parties. He was scheduled to meet later Tuesday with his former prime minister, Yulia Tymoshenko, and Socialist Party leader Oleksandr Moroz.

Yanukovych's Party of the Regions expanded his lead with 30.1 percent of the vote, with more than 70 percent of ballots counted. Tymoshenko's party came second, with a strong showing of 22.4 percent, significantly ahead of her one-time partner Yushchenko's Our Ukraine party, which had 15.2 percent.

The Socialist Party, which backed the Orange Revolution and serves in Yushchenko's government, was in fourth place with 6.3 percent of the vote, followed by the Communists with 3.6 percent. No other parties had made it over the 3 percent barrier, according to early election results, reports the AP.