Russian Prime Minister Mikhail Fradkov arrived in Norway on Tuesday for the start of a two-day official visit in which Arctic oil development is a key issue. Fradkov and his delegation were to travel later Tuesday to a western Norway oil project with Norwegian Prime Minister Jens Stoltenberg. 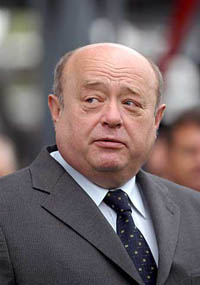 Norway and Russia share the potentially oil-rich Barents Sea in the Arctic , and Norwegian companies Statoil ASA and Norsk Hydro ASA are eager to join a major project in Russian waters. On Tuesday, Fradkov and Stoltenberg were visiting a land-based natural gas processing plant for the enormous Ormen Lange field in the Norwegian Sea . The plant is at Aukra, near the western Norway city of Molde .

Ormen Lange, about 100 kilometers (60 miles) off the coast, is being developed by the Oslo-based Norsk Hydro. The field expected to export 20 billion cubic meters (700 billion cubic feet) of natural gas annually. Fradkov will also meet the top leaders of Statoil and Norsk Hydro, which are vying for a share in the development of Russia 's Shtokman field in the Barents Sea .

Russia is expected to announced which foreign companies will be invited to join the project next month. After that visit, the Russian and Norwegian delegations will return to Oslo for a formal dinner.

On Wednesday, Fradkov will again meet Stoltenberg, as well as Parliamentary President Thorbjoern Jagland. Following an audience with King Harald V and Queen Sonja, he is to meet business leaders before returning to Moscow in the afternoon, reports the AP.