More than 100 villagers were hospitalized in eastern China on Tuesday at least four of them in comas following a leak of poisonous chlorine gas from a nearby chemical plant, local officials and media reports said. Production at the plant wasn't shut down until four days after the initial leak, after people began showing up sick at a hospital in the area outside the city of Ningbo in Zhejiang province, just south of the commercial hub of Shanghai , according to news Web site sina.com. 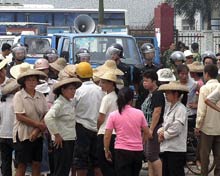 As of Tuesday, more than 130 were being treated, it said. An official with the local government in Changtang, one of several villages affected, said about 200-300 people had been affected by the gas leak, four or five of whom suffered serious poisoning and remain in comas.

Scores of other ill people had remained in their villages, said the man, who refused to give his name as is common among Chinese officials. "We are waiting for a more detailed report on the leak," he said.

A doctor at Zongrui Hospital in Ningbo said scores of patients from Changtang had been brought there for treatment, but wouldn't give other details or his name. Villagers reported seeing a cloud of gas on March 22 floating over farmland, where it scorched crops and killed poultry, sina.com said. By March 25, villagers began appearing at hospitals complaining of dizziness, sore throats, chest pains and rashes, it said.

The leak was later traced to the Donggang Electrochemical Plant in a nearby industrial zone producing alkali, sulfuric acid and other chemical components, the Changtang official and media reports said. Calls to the plant and the management office of the Daxie Development Zone rang unanswered.

Pollution and chemical spills last year sparked a series of sometimes violent protests in rapidly developing Zhejiang , although other areas of the country have suffered similar problems as well. The report of the leak came as workers were attempting to cap a leaking gas well that forced the evacuation of 11,500 people in China 's southwest, reports the AP.