Sonia Gandhi on Tuesday was to visit the parliamentary constituency she represented until stepping down last week amid inter-party feuding over whether she violated an obscure election law by holding another government job. 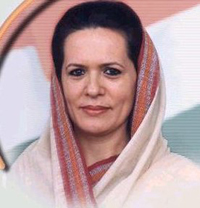 Despite her resignation as a lawmaker Thursday, Gandhi still leads the governing coalition and has pledged to run again from the Rae Bareli constituency, a fact clear from the campaign-like atmosphere that surrounded Tuesday's visit.

"She will be accorded a grand welcome ... a hero's welcome," said a spokesman for her Congress party, Akhilesh Pratap Singh, hours before Ghandi's scheduled arrival Tuesday afternoon.

Posters declaring her a goddess had been put up outside the airport in Lucknow, which she was due to fly into, and Congress party flags and floral arches lined the route her motorcade was slated to take to Rae Bareli, the rural area her family has long represented.

"She will hold road shows and address party workers at many places when she drives down to Rae Bareli," Singh said, adding that her trip would culminate with a rally in her former constituency.

Last week's resignation by the Italian-born Gandhi, the widow of former Prime Minister Rajiv Gandhi, appeared aimed at defusing opposition claims that she is not qualified to sit in Parliament since she also chairs a number of organizations.

A 1959 law in India, which many say is outdated, does not allow national lawmakers to hold other paying jobs in the government, unless Parliament makes specific exemptions.

Gandhi was first elected to Parliament in 1999. After her party won elections in 2004, she refused to take the post of prime minister, but did take over the ruling coalition and until Thursday, headed the National Advisory Council, set up to oversee the government's development program, reports the AP.