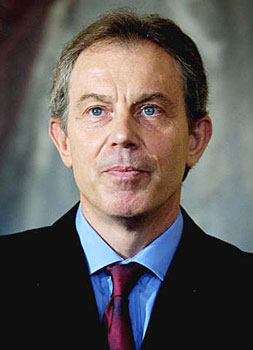 Blair was to hold talks with his New Zealand counterpart and fellow Labour leader, Helen Clark, on Wednesday as well as taking a lunch cruise in Auckland harbor and visiting a school and winery before flying out to Jakarta . Clark said the pair would discuss an annual security dialogue between the two states and greater cooperation between trade officials.

As leaders of social democratic Labour parties, both were keen to talk about greater policy cooperation, she said. Clark 's Labour-led government has troops in Afghanistan , where British troops are also involved, but was a fierce critic of the U.S.-led invasion of Iraq , that also involved British and Australian forces.

Clark said she and Blair also would discuss swapping policy information and ideas between officials and agencies on everything from health service productivity to employment and economic policy. "We are looking at a way of formalizing policy sharing arrangements between the two countries," Clark said.

Britain and New Zealand shared very similar constitutional arrangements, and in recent years had been "very like-minded" in public policy development across several areas, she said. Speaking to Auckland business leaders Blair said the European Union now "understands" that to compete in the modern trading world it should "be taking down some of the barriers to trade."

Blair said he hoped the Doha Round of world trade liberalization talks helps open up Europe 's commercial markets and that Europeans recognize they stand to benefit by removing trade barriers. New Zealand 's continued pressure on the WTO process "will be important," he added.

Outside the venue about 200 people protested Britain 's involvement in the Iraq war. Blair's visit is the first by a serving British prime minister in 48 years, and only the third-ever visit by a British leader, reports the AP.