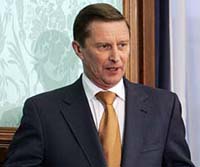 "There is nothing to comment on," Ivanov was quoted as saying. "It is complete nonsense. Naturally, we did not supply anyone with information." Russia 's Foreign Intelligence Service dismissed the allegations over the weekend as did Foreign Minister Sergey Lavrov on Monday.

"How this was done allows one to speculate that this has hidden political motives and that this is being done in connection with Iraq , but I can hardly be sure of it," Lavrov said. "It is unclear to us why the international community has to learn about such facts regarding Russian intelligence cooperation in Iraq from the media," he said.

U.S. Secretary of State Condoleezza Rice said the U.S. administration will ask Russia about the report. "Any implication that there were those from a foreign government who may have been passing information to the Iraqis prior to the invasion would be, of course, very worrying," Rice said Sunday on the CNN program "Late Edition."

"I would think the Russians would want to take that very seriously as well," she said. In Washington , U.S. State Department spokesman Sean McCormack said Rice plans to discuss the Iraq matter directly with Lavrov, by telephone this week or in person Thursday, when they meet in Berlin for a gathering of the foreign ministers of the permanent U.N. Security Council members.

In the meantime, Assistant U.S. Secretary of State Daniel Fried conveyed the U.S. request for the Russian government to look into the matter through Moscow 's ambassador in Washington , McCormack said, reports the AP.