South Korea agreed Tuesday to provide 20 billion won (US$20 million; Ђ 17 million) to improve health conditions for North Korean infants and mothers through the United Nations' health agency. South Korea will donate the money to the World Health Organization over the next two years to be used in modernizing medical facilities, strengthening the capabilities of health workers, and establishing local health service systems in communist North Korea , the Unification Ministry said. 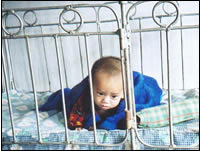 The North Korean "people will enjoy many benefits," WHO chief Lee Jong-wook said in a meeting with South Korean Unification Minister Lee Jong-seok ahead of the signing. The visiting WHO chief stressed the importance of support for infants, saying their development would be irreversibly damaged if they don't get help.

Unification Minister Lee echoed the WHO chief's concerns, citing figures that North Korean youths are 15-20 centimeters (6-8 inches) shorter and 10 kilograms (22 pounds) lighter than children of the same age in South Korea . "In that situation, it will have serious problems in infants' brain development," the minister said.

South Korea is also considering providing 2.5 billion won (US$2.5 million; Ђ 2.1 million) to North Korea through UNICEF, the U.N. children's agency, according to the ministry, which handles North Korean affairs. North Korea has relied on outside handouts to feed its 23 million people since natural disasters and mismanagement caused its economy to collapse in the mid-1990s. Famine has killed an estimated 2 million people.

But the North asked the World Food Program last year to wind down food aid and switch to development assistance. The agency shut down its programs in early December but says millions of hungry people still need aid. Last month, WFP's board in Rome approved a two-year plan to feed 1.9 million people in North Korea mainly women and children but donor nations rejected the North's demand that the agency be limited to 10 foreign staff members in North Korea , which would sharply reduce its ability to monitor aid distribution, reports the AP.