North Korea warned Tuesday that Washington 's pressure tactics won't work against the communist state and said the U.S. will pay a "high price" for its actions. "The U.S. is calculating that it can achieve its intended purpose if it ties up our hands and legs and stifles us," said the North's Minju Joson newspaper in a commentary, carried by the Korean Central News Agency. "This is a policy error and mistake that can be committed only by the Bush administration that belittles the other side and has overconfidence in itself." 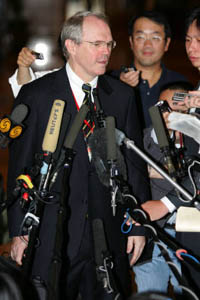 Washington has increased pressure on Pyongyang amid their drawn-out standoff over the North's nuclear ambitions. It slapped restrictions on a Macau bank and North Korean companies for their alleged involvement in illicit activity, including counterfeiting, money laundering and funding weapons proliferation.

The U.S. said those measures are a law enforcement matter that has nothing to do with the nuclear issue, but the North has protested angrily, labeling them as a sign of Washington's hostility against the communist country and boycotting international talks on the nuclear row.

The North's newspaper said the country won't give in to U.S. pressure. "We make this clear that the U.S. will pay a high price for all consequences," the commentary said, without elaborating. The paper also called for the U.S. to give "us nuclear cooperation too," apparently referring to a recent deal in which the U.S. agreed to provide India with technology and nuclear fuel despite it not being a signatory of the Nuclear Nonproliferation Treaty.

The North has condemned the deal for giving India preferential treatment by recognizing it as a nuclear power. The communist state quit the nuclear treaty in early 2003, a few months after the outbreak of the current row over its atomic weapons ambitions. The country declared last year that it has nuclear weapons, although the claim hasn't been independently confirmed, reports the AP.