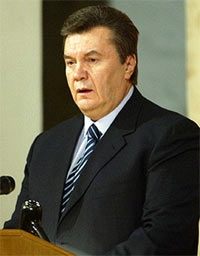 Yanukovych's Party of Regions had 29.4 percent of the vote. But in a surprisingly strong showing, the Orange Revolution heroine, former Prime Minister Yulia Tymoshenko, was holding onto second place with 22.6 percent of the vote, ahead of her one-time partner, President Viktor Yushchenko's Our Ukraine bloc with just 15.7 percent.

While Yanukovych was the top vote-getter, the now divided Orange Revolution team, which advocates a pro-western, reformist course, appears to have won the most support. The Socialists, who also backed the Orange Revolution and serve in Yushchenko's government, came in fourth place, with 6.3 percent of the vote, followed by the Communists with 3.5 percent. No other parties were shown as making it over the 3 percent barrier to enter the 450-member parliament.

The count encompassed 62.5 percent of the vote. The results have been coming in slowly due to difficulty counting the lengthy ballot sheets, with 45 parties competing to enter the 450-member parliament, reports the AP.