Former Ukrainian Premier Yulia Timoshenko said she will meet PresidentViktor Yushchenko today to discuss creation of a coalition government after parliamentary elections failed to give any party a majority. 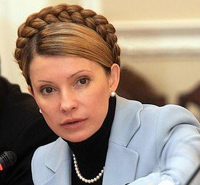 Yushchenko, whose party lay in third place with 15.6 percent, according to official results, may have to turn to Timoshenko to form a government. With 63 percent of the vote counted, Timoshenko's bloc had 23 percent, trailing only the Regions Party of Viktor Yanukovych with 30 percent.

Five of 45 parties represented in the vote will probably enter the 450-seat parliament after March 26 elections, results show. Timoshenko, who was fired by Yushchenko six months ago after the two fell out over policy and allegations of corruption within Timoshenko's team, said she would welcome a coalition with the president's Our Ukraine party.

``I will make every attempt to create a coalition,'' Timoshenko, 45, said yesterday evening, according an interview broadcast on television station 5. A coalition between Our Ukraine, the Socialists and her alliance would have about 255 seats in the parliament, more than the minimum 226 needed for a majority, Timoshenko said.

There was no announcement about what time or where the two would meet and Yushchenko's office had no comment on her remarks.

Regions Party lawmaker Ihor Shkyria said in an interview with channel 5 his party is prepared to told talks ``with everybody.'' He estimated Regions will have more than 200 seats and would accept a coalition with Yushchenko's party. Any cabinet that doesn't include Regions won't be stable, he said.

Yushchenko, who swept to power 15 months ago in the Orange revolution along with Timoshenko, lost the confidence of many voters who say he failed to match promises to root out corruption and boost living standards, reports Bloomberg.