The White House on Monday commended Ukraine's parliamentary elections even though they were a setback for President Viktor Yushchenko's West-leaning administration. "All indications are that this appears to be a free and fair election," White House press secretary Scott McClellan said. "I think that stands in stark contrast to what we saw in Belarus." 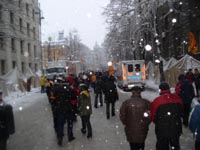 "We look forward to working with the government once it is formed," he said, saying that the results so far are preliminary Initial returns showed the pro-Russia party led by Viktor Yanukovych taking the largest number of votes, followed by the president's former ally, Yulia Tymoshenko. Yushchenko's party was a distant third.

Yanukovych, whose ballot-stuffing attempt to win the 2004 presidency triggered the Orange Revolution, declared his Party of the Regions victorious.

"If you look back, the Orange Revolution was a powerful example of democracy for people around the world," McClellan said. "And on Sunday the people of Ukraine had the opportunity to cast a ballot in parliamentary elections.

"People of Ukraine are continuing to shape their own future," the White House spokesman said. "The Ukrainian people have shown the world that they are committed to important ideals of economic ideals of economic freedom and democratic progress and open trade. That lays the groundwork for a promising future", reports the AP.