The king and queen of Spain started a three-day visit to France on Monday, less than a week after the Basque separatist group ETA declared a unilateral cease-fire. King Juan Carlos was expected to discuss the cease-fire, which could end nearly four decades of violence that had claimed more than 800 lives, in a meeting Monday with French President Jacques Chirac. 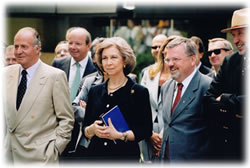 The monarchs' first state visit to France since 1985 points to improved bilateral ties sought by Socialist Prime Minister Jose Luis Rodriguez Zapatero of Spain, said one expert. "It is part of a return to normalcy," said Paul Aubert, a professor of Spanish history at the University of Aix-en-Provence in southeastern France.

The two countries have been close partners over the years in the fight against ETA, the outlawed separatist group blamed for more than 800 killings since starting a campaign for Basque independence in 1968 in a region straddling northeast Spain and southwest France.

French Defense Minister Michele Alliot-Marie greeted the Spanish king and Queen Sofia on their arrival at Paris' Orly airport on Monday afternoon. The king and queen were expected to have dinner Monday at the presidential Elysee Palace with Chirac and his wife, ernadette.

The royals were also expected to meet with French Prime Minister Dominique de Villepin and other top government officials. Paris Mayor Bertrand Delanoe was to host them on Tuesday, and they were to visit a factory of airplane maker Airbus in southern Toulouse on Wednesday, reports the AP.