EU is ready to be friends with new Ukraine government

The European Union on Monday said it appeared Ukraine's parliamentary election was free and fair, and it urged the next government to continue seeking closer ties with the 25-nation bloc. The EU's external relations commissioner, Benita Ferrero-Waldner, said the EU wants to push on with a reform program meant to bring Kiev closer to the EU. 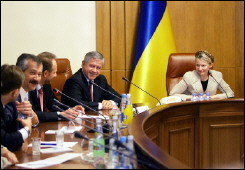 EU is ready to be friends with new Ukraine government

"We do hope that also the next government will want to come closer to the European Union," she told reporters. Ferrero-Waldner said early reports showed that "it seems there were free and fair elections" in Ukraine.

"This was our first priority ... to see that democratic elections would take place and I think that President Viktor Yushchenko has assured us of that," said Ferrero-Waldner.

Exit polls showed that pro-Russian opposition leader Viktor Yanukovych's Party of the Regions taking the largest number of votes in Sunday's election, dealing a blow to Yushchenko's pro-Western party. The EU has so far rejected overtures by Yushchenko to offer Ukraine full membership within the EU. But Ferrero-Waldner said that during a trip to Kiev three weeks ago she met with political leaders who all showed a willingness to continue efforts to forge closer links, including a possible free trade pact.

Separately, Europe's human rights watchdog said although no voting violations were found, the organization of the local and regional elections on the same day as parliamentary elections was a mistake which "regrettably undermined the progress made to conduct elections in an efficient manner."

The Council of Europe said overcrowding was prevalent in the vast majority of polling stations mainly due to the length of the ballot papers and the inconsistent layout of the ballot papers. "The overcrowding often gave rise to voting outside the voting booths and to family voting, thus compromising the secrecy of the vote," the council said in a statement, reports the AP.