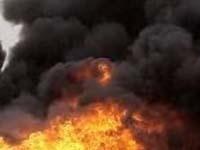 An explosion inside a grocery store killed at least eight people and wounded about a dozen others Monday on a violent southern island in the Philippines , police said.

The island is a stronghold of the al-Qaida-linked Abu Sayyaf rebels.

Philippine police and U.S. troops who took part in recent counterterrorism exercises were seen in the area shortly after the explosion, reports the AP.