In the half-decade it has taken Microsoft Corp. to develop a new version of its Windows computer operating system, Google Inc. has blossomed from a little-watched Internet search engine to emerge as one of Microsoft's biggest threats. 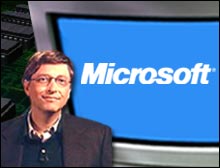 Words such as "blog" and "spyware" have entered the popular lexicon, in their own ways transforming the online experience. The iPod and the BlackBerry have revolutionized on-the-go gadgetry, becoming just two of the myriad competitors challenging the world's largest software company.

Meanwhile, Microsoft has undergone major changes of its own, including a massive retrenchment to focus on security and moves to get further into businesses as varied as videogame consoles and online mapping.

Yet the company has struggled to push out the next release of its flagship product.

"The product is clearly now really late," said Rob Enderle, who is among the industry analysts who once expected the new Windows version as early as 2003.

Microsoft announced this week that the consumer version of Vista will be delayed again, until early next year, further extending the yearslong gap between major Windows releases. (A version for large business customers is due out in November.)

The delay, which the company said resulted in part from efforts to improve security, is the latest in a series of hiccups for Windows Vista.

The release of Vista was thrown off track in early 2002, when Chairman Bill Gates ordered the entire company to focus on improving the security of its existing and future products, following a series of embarrassing breaches.

The time-consuming effort, which included a major security update, Service Pack 2, for the current Windows XP, has helped keep Microsoft customers safe from Internet attackers. But the work also took engineers away from developing Vista.

"We made the decision that it was more important for our customers to improve the security of our existing products than it was to accelerate the introduction of (Windows Vista)," said Brad Goldberg, general manager of Microsoft's Windows Client product management, reports AP.