U.N. Secretary-General Kofi Annan traveled Thursday to Congo's restive east, where the United Nation's largest peacekeeping mission is locked in a deadly struggle to end violence behind one of the world's worst humanitarian crises. 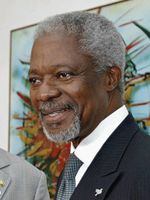 Annan's plane touched down at Kisangani, a threadbare city that changed hands repeatedly during back-to-back civil wars that officially ended in 2002 but whose violent aftereffects aid workers say leave hundreds of civilians dead each day.

"I don't think any population in the world has been put through a harder period," Annan said Wednesday of the Congolese.

Dozens of Congolese troops met Annan on his arrival and he was due later to visit a demobilization center for militia fighters looking to either join their one-time foes in the army ranks or return to civilian life.

The fighters' successful reintegration into Congolese life after years of fighting is viewed as key to long-term peace in the vast central African nation, whose troubles have drawn in armies and fighters from neighboring countries.

Some 1,000 people die needlessly each day, they say, in what the U.N. has labeled the world's worst humanitarian crisis.

Annan's 16,700 peacekeepers are battling alongside the Congo military to clear the vast eastern borderlands of remaining fighters, hoping to calm the area so lynchpin elections scheduled for June 18 can take place. Numerous peacekeepers have died, including six Bangladeshis killed in gunbattles in recent months, reports the AP.