The state of Nevada has sued the federal government, accusing it of withholding documents that show the planned Yucca Mountain nuclear dump cannot safely hold the nation's radioactive waste. 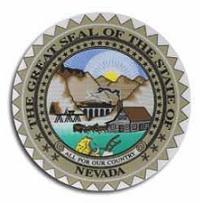 The complaint, filed in Reno on Wednesday, is the fourth federal lawsuit the state has pending against the plan to bury 77,000 tons of nuclear waste in the Nevada desert, 90 miles (145 kilometers) northwest of Las Vegas .

The case seeks the release of a draft application prepared by contractors seeking a Nuclear Regulatory Commission license to open the dump.

"The federal government is required by law to share its important Yucca information with the host state, and we are entitled to such information under the Freedom of Information Act as well," Nevada Attorney General George Chanos said in a statement.

An Energy Department spokesman in Washington said the agency has made public on the Internet millions of pages about the project, but was under no legal obligation to release the draft application.

Spokesman Craig Stevens said in an e-mail that the application would be made public once it is formally submitted to the NRC.

"This department and this administration remain committed to the licensing, construction, and operation of Yucca Mountain as the nation's permanent geologic repository for spent nuclear fuel," Stevens said. "This lawsuit will not deter us."

The state's three-page complaint lists steps Nevada has taken to secure the draft application, including requests by Gov. Kenny Guinn to the secretary of energy and President Bush; subpoenas from Rep. Jon Porter, R-Nev.; litigation before the NRC licensing hearing board; a Freedom of Information Act request; and Energy Department administrative appeals.

All those requests were rebuffed, Chanos said.

"What are they trying to hide?" he said. "If the repository is safe, you'd think they'd be anxious to prove it."

The Energy Department had planned to open Yucca Mountain by 2010. But it missed a self-imposed deadline to apply for a license by the end of 2004, and licensing hearings are expected to take several years.

The process has been stalled by budget shortages, political opposition, a controversy over whether scientists falsified data and by a court-ordered rewrite of EPA radiation standards, reports the AP.