North Korean cargo ship seized after being used to smuggle heroin into Australia was sunk Thursday when the Australian air force used the vessel for target practice. 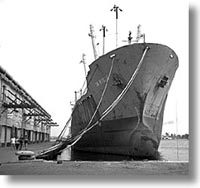 The Australian Federal Police said the freighter Pong Su was towed out of Sydney Harbor earlier this week, then destroyed Thursday by a bomb dropped from a F-111 jet fighter and sank 140 kilometers (90 miles) off the coast of New South Wales state.

The vessel was seized in 2003 after being used to smuggle in more than 125 kilograms (275 pounds) of heroin.

It had anchored off the southwestern Victoria state town of Lorne, while the drug haul was carried ashore by dinghy.

Last month a jury cleared the ship's captain and three officers of involvement in an international drug ring. The crew also have been cleared of drug charges. Charges against the remainder of the ship's crew were dropped in 2004.

It was not immediately clear if the North Koreans have been deported.

Four men who were involved in transporting the drugs from the ship to the shore pleaded guilty to drug charges. Two have been sentenced to 22 and 23 years in prison and two more are awaiting sentence. Their nationalities were not released.

The Australian government and U.S. State Department have said the case reinforces suspicions that the North Korean government deals in drugs to prop up its failed economy. The reclusive communist state, however, strongly denies such allegations, reports the AP.