He has been jeered by fans, criticized by Michel Platini and Pele, and considering leaving Real Madrid. But striker Ronaldo is the key to Brazil's hopes to win the World Cup this summer. 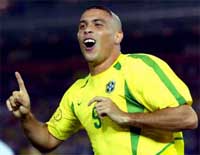 Brazil coach Carlos Alberto Parreira said Wednesday that Ronaldo had a guaranteed spot on the team that will seek a record sixth Cup title in Germany.

"I'm certain that Ronaldo will have a great World Cup, because he is a player for special moments," Parreira said in an interview with Pele's Web site.

Parreira downplayed recent criticism that the player was too old, too fat and too preoccupied with off-field problems to deliver during his fourth World Cup on a team brimming with talent.

"Ronaldo has great personal challenges. He can break records. So it would be a great disappointment if he didn't have a terrific World Cup," Parreira said in the interview.

Ronaldo, 29, has a chance to become the tournament's all-time scoring leader. He has 12 goals, two fewer than record-holder Gerd Muller of Germany and one less than France's Just Fontaine.

But Ronaldo has struggled recently on Real Madrid. Since he joined the club in 2002 and led the team to a record 29th Spanish league title, Real Madrid hasn't won a trophy since _ its longest drought in 50 years.

Former French star Michel Platini said Ronaldo "has too many years and is carrying too many kilos" to play top-level soccer.

Ronaldo, under contract with Real until 2008, has said he feels unwanted and is considering leaving the Spanish side because of the constant criticism.

He also is facing competition from a plethora of young Brazilians, including Real Madrid teammate Robinho, Inter Milan's Adriano, and Barcelona standout Ronaldinho, FIFA's player of the year the past two years.

But Ronaldo has rebounded from adversity before. After a serious knee injury nearly ended his career, he returned to lead Brazil to its fifth Cup title in 2002 winning the tournament scoring title in addition.

And Parreira thinks his experience will give Brazil an edge.

"Ronaldo has to lead us and be our reference point," Parreira said. "He has to shoulder his responsibility", reports AP.