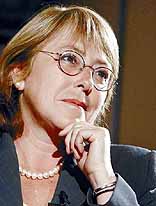 Bachelet was in Argentina on her first foreign trip since taking power 10 days ago, meeting with fellow left-leaning President Nestor Kirchner and touring a government-funded low-income housing project.

Speaking to a joint session of the House and Senate before wrapping up a two-day visit en route to Uruguay, Bachelet declared that adversarial relations between the two neighbors are a thing of the past.

"As Argentines and Chileans, we must stop looking at each other as adversaries and learn to look to each other as colleagues and friends," she said to applause from the lawmakers.

Chile and Argentina have warily eyed each other across their Andean-mountain border for many years. The two nations nearly went to war in December 1978 over their southern boundary in the remote tip of Patagonia, but the conflict was avoided thanks to the intervention of then-Pope John Paul II.

Bachelet, whose center-left coalition has governed Chile since the Pinochet years, was warmly embraced by Kirchner as they appeared at the home-building project and enjoyed a lavish state dinner. Kirchner welcomed her with a sizable delegation, and both leaders expressed desires to end poverty and bolster their democracies.

During her stay here, Bachelet met with a dozen Argentine governors and toured a kindergarten renamed in honor of Chile's former socialist president, Salvador Allende, who died in a 1973 military coup. She also signed accords for expanded trade and also raised the sensitive issue of future Argentine supplies of natural gas to Chile for power generation and industrial uses, reports AP.