Italian medalists from the Turin Olympics and Paralympics were honored in a meeting with president Carlo Azeglio Ciampi on Wednesday. 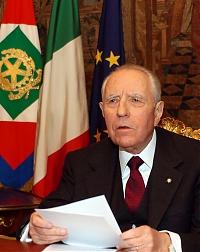 Ciampi praised the "dedication, desire and sacrifice" of the athletes after Italy won 11 medals at the Olympics and eight at the Paralympics.

Luge gold medalist Armin Zoeggeler was making his second trip to the presidential palace, having also won gold in Salt Lake City in 2002.

Enrico Fabris, who won two golds and one bronze in speedskating, said the ceremony finally made him realize what he had accomplished.

"The recognition from Ciampi captures better than many other things (the importance) of our medals," Fabris said. "People recognize me now, but I hope that my medals are also useful for speedskating", reports the AP.