Firefighters were still battling a fire that broke out at a nuclear power plant facility in western Japan on Wednesday, but no radiation leakage was reported, officials said. Two workers were injured. 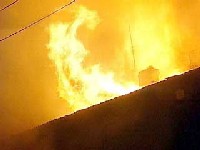 Smoke poured out of a waste disposal facility between the No. 3 and No. 4 reactors at Oi power plant in Fukui at around 6:40 p.m. (0940 GMT), according to local government official Hiroaki Fujiuchi.

It took firefighters nearly two hours to reach the fire because of thick smoke, and they were still battling the flames late Wednesday, said Ikuo Muramatsu of the plant operator, Kansai Electric Power Co.

Two workers who were inspecting the facility were rushed to a hospital after inhaling smoke, but they were not in critical condition and were not exposed to radiation, local fire officials said.

A third worker was evacuated from the site but was not injured, according to another local government official, Shiro Konishi. Other workers at the plant were allowed to remain at their stations, he said.

Some of the waste at the facility contained low levels of radiation, but did not pose a danger to human health, Konishi said.

All four pressurized water reactors at Oi were operating normally, and there was no radiation leakage, according to Muramatsu.

Resource-poor Japan is heavily dependent on its nuclear program, with the country's 55 nuclear reactors now supplying about one-third of its electricity, according to the Natural Resources and Energy Agency.

But the public has been increasingly wary of reactor safety following a series of reactor malfunctions and accidents.

In 2004, five workers were killed when a corroded pipe at a reactor in western Japan ruptured and sprayed plant workers with boiling water and steam in the country's worst-ever nuclear plant accident.

No radiation leaked from that reactor, which was allowed to resume operations in December last year.

The government has said it wants to build 11 new plants and raise electricity output generated by nuclear power to nearly 40 percent of the national supply by 2010, reports the AP.