Initial tests conducted on dead chickens from the Gaza Strip indicated that the deadly H5N1 strain of bird flu has spread to Gaza , the first outbreak of the disease in the Palestinian territories, Israel 's Agriculture Ministry said Wednesday. The tests were conducted after about 200 chickens were found dead in a coop in Rafah, in the southern Gaza Strip early Wednesday, ministry spokeswoman Dafna Yarisca said. 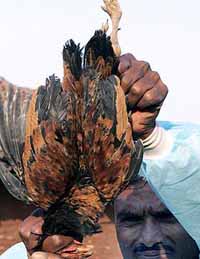 Although final results will not be available for at least 48 hours, the ministry has advised the Palestinians to treat the initial results as definitive because they came up positive for the H5 protein, Yarisca said. Further tests will determine if it is H5N1. Israeli and Palestinian officials will meet later Wednesday to discuss steps to take to try to halt the spread of the deadly flu, which reached Israel last week. Israel conducts all such tests on behalf of the Palestinians, who do not have the technology. The sides have been cooperating for months to try to prevent the deadly bird flu from reaching the region.

Acting Palestinian Health Minister Ghassan Khatib confirmed that initial tests indicated an outbreak of the flu, but could provide no further details. Israel has culled some 400,000 infected turkeys and chickens since discovering the bird flu virus in southern Israel last week. Infected farms have been isolated and Israel is planning to compensate farmers damaged by the virus.

The H5N1 virus has killed or forced the slaughter of tens of millions of chickens and ducks across Asia since 2003, and recently spread to Europe , Africa and the Middle East . World health officials fear H5N1 could evolve into a virus that would easily be transmitted between people, potentially triggering a global pandemic, though there is no evidence that is happening. About 100 people have died from the disease worldwide, most after having been directly infected by sick birds, reports the AP.