Two explosions inside two low-budget hotels in the Bolivian capital killed two people and injured at least seven, police said. The explosions Tuesday night, which also caused severe damage to the hotels, were "a case of terrorist crime," police commander Oscar Nina said. Two people an American and a Uruguayan were arrested early Wednesday in the case, according to La Paz district attorney Jorge Gutierrez. Police planned a news conference later in the day to provide more details. 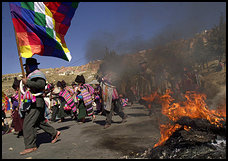 Officials are unware of the possible motives behind the explosions but believe the two foreigners were directly responsible, Gutierrez said. The explosions occurred in the historic city center in two low-cost hotels.

The fatalities were caused by the first explosion, Nina said. Police managed to evacuate the second hotel before the blast there, he said. The victims are an unidentified woman and a man, presumably Bolivians, Nina said, reports the AP.