Protesters staking out the Belarusian capital's main square to demand a new vote in disputed presidential elections found new optimism Wednesday as the sun shone and temperatures climbed above freezing Wednesday. The warming conditions raised the spirits of demonstrators who had been beleaguered by frigid weather since they began their protests Sunday demanding a new vote after that day's election returned authoritarian leader Alexander Lukashenko to power. 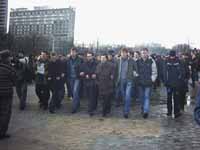 Opposition leader Alexander Milinkevich has urged demonstrators to keep up the daily vigil until a major show of strength Saturday. "I'm glad it's warm, that will help us stay here," said Viktor Donich, a 25-year-old computer programmer, one of about 300 demonstrators forming a human chain around about 15 small tents set up to provide the protesters a bit of emergency shelter. "We will stay here until we win."

The prospects of achieving a huge crowd that could force that victory seemed slim. The rallies attract 5,000-7,000 people at night, but dwindle by about 1 a.m. , when the last city buses make their runs. Nor is there a sense that support is growing. Cars passing the election-night rally the biggest at about 10,000 people blew horns in solidarity. At midday Wednesday there wasn't a honk to be heard.

Milinkevich stood in virtual darkness on Tuesday night as he urged some 700 demonstrators to remain strong and return for a weekend rally. Demonstrators bounced to music and against the cold  and chanted "Mi-lin-ke-vich! and "Long Live Belarus ! "Come here every day to speak of freedom," Milinkevich said.

While police have not moved to disperse protesters, they persisted with the arrests and harassment that marked an election campaign widely denounced as unfair. A police commander pledged not to move against the demonstrators, deeming the display too "pathetic" to cause the regime concern. Milinkevich's staff claimed Tuesday that 109 people were detained in connection with the protests, as authorities apparently sought to keep protest numbers down and unsuccessfully to prevent people from bringing food to the tent camp.

Two senior opposition figures, United Civil Party leader Anatoly Lebedko and his deputy, Alexander Dobrovolsky, were detained Tuesday and sentenced to 15 and 10 days in jail, respectively, for participation in an unsanctioned protest. The head of a leading opposition newspaper was detained near the square Tuesday. Showing bruises on his face and chest, protester Mikhail Avdeyev said three riot police beat him up early Wednesday when he left the tent camp to buy cigarettes. He had been carrying the red-and-white national flag that Lukashenko scrapped in favor of a Soviet-style version. He said his attackers tied it in knots when they could not tear it apart.

"They beat me up, but I am still standing here for Belarus ," he said. Riot police regiment commander Yury Podobed told reporters Wednesday that the rally would not be suppressed, Interfax news agency reported. He described the demonstrators as being between 15 and 27 years old and numbering no more than 120.

"I suggest that you climb to the roof of the Republic Palace (located on Oktyabrskaya Square ) to take a look at this pathetic scene," Interfax quoted him as saying. According to the official vote count, Lukashenko, a former collective farm director who has been in power for 12 years, won with nearly 83 percent. Popular among many Belarusians for providing economic and political stability, his victory had been expected.

But Milinkevich, who electoral officials said received 6 percent, called the incumbent's tally "monstrously inflated." In an interview Tuesday with The Associated Press, he said a new election should be held, with Lukashenko barred from running. Milinkevich waded into the crowd surrounding the tents with his wife early Wednesday, shaking hands, consulting with protesters about their determination to stay put.

A bearded, silver-gray-haired 58-year-old who has been a physicist, city official and rights activist, Milinkevich has a warm, worn face and a sometimes sheepish smile. Addressing the crowds in the square in a coat and scarf of the opposition's blue color, he acknowledged applause with his arms raised high but his head slightly bowed with humility.

His push for a new vote is supported by the United States which calls Lukashenko a tyrant and along with the EU is mulling over punishment for an undemocratic election but faces major obstacles in the struggle against a leader determined to stay in power. A major test could come Saturday, with Milinkevich calling for protesters to come out in force on the anniversary of the declaration of the first, short-lived independent Belarusian republic in 1918. "We will stay here until the 25th, and on the 25th we will gather here to fight for our future," he said, speaking on the third night of protests, reports the AP.