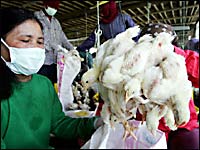 The killings followed U.N. confirmation this month that six chickens had tested positive for the deadly H5N1 strain of the bird flu virus in Kabul and the eastern city of Jalalabad .

The United Nations also announced Monday that two more cases of H5 bird flu were found in a chicken in Kabul and a dead crow in eastern Kunar province, but further testing must be performed at a U.N. Food and Agriculture lab in Italy to confirm the substrain of the virus. Esmoni said several people in Tashti Barche voluntarily handed over their chickens to be culled because they feared an outbreak of the deadly virus. Further culling is expected to be carried out during the next few days.

Worldwide, 184 human cases of bird flu have been confirmed, including 103 deaths, according to the U.N. World Health Organization. The virus has killed or prompted governments to destroy more than 140 million birds since late 2003. Health officials fear the virus could evolve into a version that could easily be transmitted between people, potentially triggering a global pandemic. So far, there has been no evidence of such a mutation, reports the AP.