College of Cardinals to create 15 new 'princes' in Rome

Members of the College of Cardinals have begun arriving in Rome for a ceremony Friday to create 15 new "princes" of the Catholic Church the first time the college has gathered as a whole since Pope Benedict XVI was elected pontiff last April. Benedict invited members of the college to attend a day of reflection and prayer on Thursday, a day before he presides over a formal consistory to elevate 15 new prelates to the top ranks of the Catholic hierarchy. 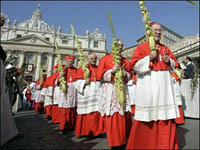 College of Cardinals to create 15 new 'princes' in Rome

Among those being promoted Friday are Hong Kong bishop Joseph Zen, an outspoken critic of China; Archbishop Stanislaw Dziwisz, Pope John Paul II's longtime private secretary; and Boston Archbishop Sean O'Malley, who has been coping with the fallout of the U.S. church sex abuse scandal.

O'Malley told reporters in Rome that he hoped his elevation would signal a new start in the diocese at the heart of the U.S. scandal. O'Malley, 61, took over the post three years ago after Cardinal Bernard Law resigned. "I hope that this will be a sign that the life of the church must go on, and that there's new horizons for us," O'Malley said.

During Friday's ceremony, each of the 15 new cardinals will take an oath and receive his red "biretta," or cap from the pope. Benedict will tell each one that the red of the biretta symbolizes their readiness to act, "even to the point of spilling your blood for the increase of the Christian faith, for peace and harmony among the people of God, for freedom and the spread of the Holy Roman Catholic Church."

The new cardinals will receive their rings, which symbolize their links to the pope, during a Mass on Saturday in St. Peter's Square. Benedict announced Feb. 22 that he was naming 15 new members of the College of Cardinals, 12 of whom are under age 80 and thus eligible to vote in a conclave to elect his successor. Following Friday's ceremony, there will be 120 voting-age cardinals, and 73 over-80 cardinals, for a total of 193.

Europe still has the vast majority of cardinals at 100, 60 of whom are of voting age. Latin America is next with 20 voting-age cardinals, followed by North America with 16. Asia has 13, Africa nine and Oceania two, reports the AP.