Afghan security forces attacked a group of suspected Taliban rebels after they crossed the border from neighboring Pakistan and killed at least 15 of them, an army commander said Wednesday. 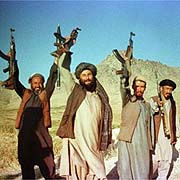 Another four insurgents fled back across the frontier after the two-hour gun battle late Tuesday near the border town of Spin Boldak in Kandahar province, said Abdul Razak, the frontier security commander.

Included among the dead was a midlevel Taliban commander, Mullah Shien, who for months has allegedly led several cross-border raids from secret bases on the Pakistani side of the frontier, Razak said.

His followers would regularly attack foreign and Afghan troops and bomb trucks hauling gasoline for the U.S.-led coalition, he said.

"We got a tip-off about them coming across the border. We went down there and fought them," the commander said. "We now have all the dead bodies."

"It's nonsense: just another allegation. We have our security forces there who are guarding the border," he said.

Saqib Aziz, a top government administrator at Chaman, a Pakistani town adjacent to Spin Bokdak, said the people killed by Afghan security forces were not Taliban fighters but belonged to the Noorzai tribe, a Pashtun sub-tribe, whose people live on both sides of the border and frequently travel across the frontier. He didn't know what sparked the fighting, reports the AP.