With a 70-year-old veteran revolutionary as its new head, the closely knit communist party of Laos shows few signs of allowing opposition to its conservative, secretive rule. Laos , one of the world's five remaining communist-run nations, ended its 8th Party Congress on Tuesday with delegates making it clear the party would continue setting policies as it has since it overthrew a U.S.-backed government three decades ago. 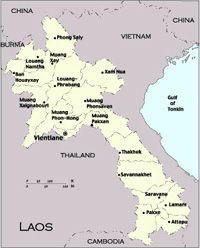 Stepping into the country's most powerful position, Vice President Choummaly Sayasone replaced another veteran, 82-year-old Khamtay Siphandone, as party secretary general. The son of a farmer from southern Laos , Choummaly joined the communist guerrillas in 1954, rising through military and party ranks during the Indochina War. Like his close comrade Khamtay, Choummaly is expected to exert conservative military control over the Lao People's Revolutionary Party, and thus the impoverished, landlocked nation of 5.5 million.

Western observers in the Lao capital of Vientiane say there is little doubt that his elevation was a vote to preserve the status quo within Lao politics and society. "The outlook is for continuing tight party control, resistance to any kind of political reform or transparency, encouragement of foreign investment, and dependence on foreign aid," said Martin Stuart-Fox, an Australian expert and author of several books on Laos .

Little new, liberal blood was evident among the 55 members of the newly elected party Central Committee, who include Khamtay's son and two sons of deceased strongman Kaysone Phomvihane. The new 11-member Politburo includes Foreign Minister Somsavat Lengsavad and Pany Yathothu, from the Hmong ethnic minority and the only woman on the all-powerful body.

Addressing the 498 delegates at the closed-door congress, Khamtay outlined major tasks for the coming five years. These ranged from alleviating poverty to "enhancing solidarity and unity among the party and the masses," developing hydropower, preserving Lao culture and eliminating corruption, the national news agency KPL said.

The party held its first congress in 1955 with just 20 delegates and then went on to lead guerrilla forces fighting the rightist, U.S.-backed government with the help of Vietnamese troops. The guerrillas took power in 1975, the same year that fellow communist revolutionaries triumphed in neighboring Vietnam and Cambodia . After a period of harsh Marxist rule, the party relaxed controls over the economy and allowed a considerable degree of private enterprise. But it has brooked no political opposition and maintains strict controls over all media. After North Korea , it is probably the least reformist of the world's communist regimes, which also include Cuba , China and Vietnam .

The congress was held in advance of April 30 parliamentary elections in which 175 candidates are contesting 115 seats in the National Assembly. All candidates are party members. Khamtay is expected to retire as president before the elections, with Choummaly the most likely candidate to succeed him, with the post of vice president possibly going to Gen. Asang Laoly, a former minister of internal security with a strong power base within the security forces.

Six of the 11 Politburo members are from military ranks, including five of the top six. Choummaly, from the remote province of Attapeu , "fought on various battlefields for national liberation," being promoted to lieutenant general in 1990 and minister of defense a year later, according to a KPL biography. He has served as the country's vice president since 2001 and in 2003 was made a permanent member of the Politburo. Choummaly holds degrees in military and political subjects from the Soviet Union and Vietnam , reports the AP.